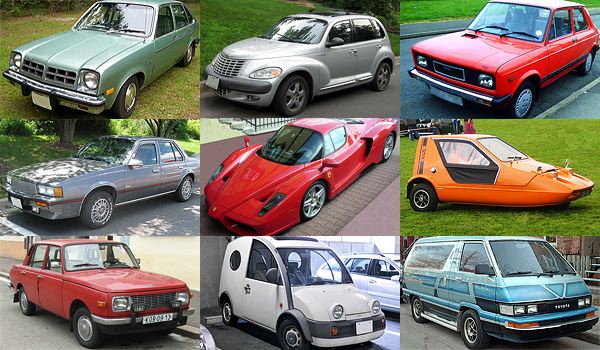 From the tailfins of the 1950s to the big block muscle of the 1960s, Detroit has produced some of the sexiest and most beautiful cars ever made. But sometimes even legendary auto makers make a blunder. Here are 10 cars that American manufacturers would probably like to take back.

Take a Hornet and chop the back off. The idea was to come up with a subcompact to compete with an influx of fuel efficient foreign rivals. The result was the Gremlin.

Even though it was not a bad car by any stretch, the Edsel still became synonymous with corporate failure. The cars undoing was a media campaign that went overboard in hyping the car, and a front end design that buyers found disconcerting to say the least.

Take an odd looking wagon and wrap it in hideous plastic cladding and you wind up with a Pontiac Aztec. The car was so awful that it is considered a major cause of Pontiac’s downfall in 2010.

t’s hard to make a minivan attractive, but Pontiac did try. The resulting space age debacle was a sales flop and painful to look at.

Road Test Magazine likened the Pacer to a “four foot submarine sandwich” on its release in 1975. The mid 70s were known for styling miscues, but the Pacer with its rounded rear and bug eyed look made even flared pants look good.

The Chevy Cavalier was not a great looking car to begin with, but GM made it worse when they added plastic moldings, cheap chrome trim and a Cadillac badge.

Usually chopping off a car’s roof improves its appearance. Not so with the PT Cruiser. What retro charm it had went out of the window when the top came off.

Imagine a Chevrolet El Camino that fell out of the ugly tree and hit every branch on the way down. What you would have is the Dodge Rampage. Not even a set of Goodride tires could save this one.

The Mustang II is ugly using any interpretation of the word. Even today, pony car enthusiasts shudder at the mere mention of it.

The Chevette is not really ugly, but just unforgivably bland. It’s what happens when a car design has to be finished before lunch.