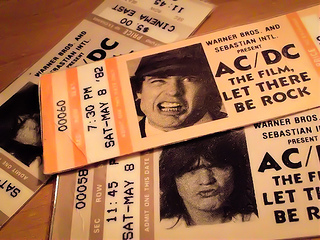 Buying tickets for live shows has become more complicated these days due to VIP packages, large-scale pre-sales events by credit card companies and fan clubs, and the proliferation of ticket brokers. Many people who eagerly hop on their computers to buy tickets to a favorite act are often left out in the cold with shows selling out in as little as five minutes. The coveted stubs are often found later on broker websites at a much higher cost.

While none of these practices are anything new, they have become more common and very annoying to concert-goers. Many artists offer tickets to their shows days in advance of a general public sale, leaving those who do not belong to a fan club, or who do not have certain charge card perks, with few options for attending.

With other shows, the majority of tickets are snapped up by the first 10 people in line, who are often paid by someone else to be there. They are then quickly put up for sale on sites such as StubHub, at a considerable mark-up over face value. This used to be known as “scalping”, and it is currently legal in 38 states.

Some artists dictate that the best seats be part of VIP packages that include a meet and greet backstage, or just simply give away prime seating to people on their personal guest lists.

Other companies in the online concert ticket

business include Ticketmaster-owned TicketExchange and TicketsNow, as well as Coast to Coast Tickets. None actually buy tickets but simply provide a venue for resale while taking a cut of the profits in return.

A class-action lawsuit filed recently accused Ticketmaster of holding back the best tickets in order to sell them for a higher profit on TicketsNow. This practice may have been behind a 2009 incident in which Bruce Springsteen fans were sent directly to TicketsNow to purchase seats when there were many face value tickets remaining. Ticketmaster blamed a computer glitch for the event.

Some artists have gone to a paperless ticketing system to outwit scalpers, but this can present challenges such as showing the credit card used and personal identification, and requiring everyone who is attending together to arrive at the same time. Reselling is nearly impossible if the person is unable to go to the show.

How to Get Tickets

For many, joining an artists fan club for an annual fee or holding a special credit card may be the only way to get the desired tickets. Some folks may get lucky by waiting until the day of the show and picking up prime seats that were not used by friends of the artist. There may be unsold VIP packages as well.

Others may simply opt to pay the scalpers. The idea behind sites such as TicketExchange and StubHub is to make money, but often prices will drop quite a bit as the day of the show gets closer.

The Development of Modern Agricultural Machinery in the 21st Century
How Do I Choose An Electronic Cigarette?
To Top