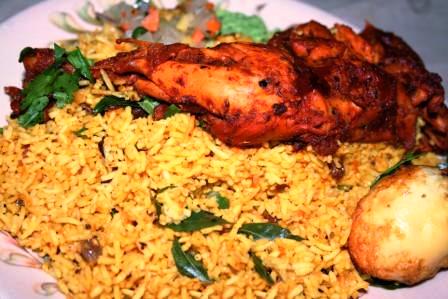 Chicken Biryani is a popular dish around the globe made of basmati rice and chicken which are layered and cooked together along with some spices. This tasty dish first originated in Persia or Arabia. Then the Mughals bought biryani to India with them when they invaded here. Hyderabad is considered as the biryani capital of the world as it serves several innovative biryani recipes. Now biryani has taken several other forms but still the basics remains the same. A good chicken biryani comprises perfectly cooked chicken with right blending of spices and herbs. Many of you must have tried to make a delicious chicken biryani at home, so here is a quick recipe for you.

The first step is to marinate the chicken with the spices like garam masala, turmeric powder, chilly powder, ginger garlic paste and yogurt. Then cook the chicken in pressure cooker with tomatoes and coriander leaves. In order to add some more flavour to chicken, fry some onions in ghee and add a masala paste made up of green chillies, coriander leaves, ginger and garlic flakes along with the cooked chicken. Let it simmer for some time until the mixture blends well with chicken.

Heat 4 tablespoon of desi ghee in a wok and add the drained rice. Fry the rice in ghee till it become slightly crispy and then add the spices like cinnamon, cloves, nutmeg. Later move the rice to a rice cooker along with 4 cups of water and salt and leave it to cook for some time. On the other hand make slices of onion and fry it in ghee till it become golden brown, keep it aside.

Now the cooked rice and chicken are to be assembled in layers. Spread a little amount of ghee in rice cooker followed with a layer of rice, and pour some saffron soaked in milk on top of the rice, then a layer of chicken with the masala it was cooked with, repeat this layering for few times and finally sprinkle some fried onions on the top and cook again for 5-6 minutes. What you get now is the flavoursome and aromatic chicken biryani, eat and make others eat your tasty dish.

You can have your biryani with Raita prepared with yogurt, cucumber, raw onions and coriander leaves. It is a great dish to make at home with a great flavour.

Mid-Day Munches: Quick Appetizers To Deal With Hunger Pangs
Relish The Flavor of Oolong Tea With Many Health Benefits
To Top