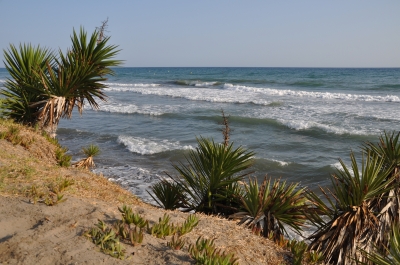 I recently spent two months traveling around Costa Rica and it was one of the best trips I have ever taken. The wildlife is abundant, the surroundings are beautiful and the people are warm and friendly. If this is on your short-list of destinations for your next vacation, I highly recommend it. Based on my experience, here are some helpful tips for planning your Costa Rican getaway.

In a crafty PR move, the tourist industry in Costa Rica started referring to the wet season as the green season, and green it is during this time. Having traveled to many tropical locations during the low season, I quickly saw that it typically did not rain too much.  So, I had no qualms about booking my trip during this time of the year. Sure, it rained plenty in certain areas, but typically not until the later afternoon or evening. I spent one month in Quepos, which is near the famous Manuel Antonio park and its beaches. We pretty much hit the beach every day.We had great weather, there were far fewer people and accommodation cost a lot less.

Costa Rica can be Pricy

Having spent a lot of time in other countries in Central America, as well as other inexpensive destinations around the world, I found that Costa Rica was comparatively expensive in many respects. Generally speaking, it is a wealthier, more developed country with a strong tourist infrastructure.  If you are used to the cheap shuttle buses and minivans that transport you between popular tourist spots, you really won’t find that here. Our taxi driver from the airport in San Jose offered to take us to Quepos, which is under three hours, for a whopping 80 dollars a person. Sure, it included a bit of a tour element with some stop-offs along the way, but hardly a bargain in my eyes.  If you have a leaning towards international fare, some restaurants may cost as much as they do in the US. Imported foods have a 100 percent tax levied on them, and even some local items like cheese, can be pricey.

This is a particularly compelling reason to travel in the off-season, and you can search for a great deal on resorts in Costa Ricaon travel booking sites like Expedia. If you are going to spend a bit of time in one spot, you might consider renting a house or apartment with a kitchen to cut back on your food bill a bit—we did this and it made a huge difference. Going off the beaten path may help a bit too. For example, if you are hitting the beaches of Guanacaste, consider Playa Portrero or one of the other beaches in that area, rather than the built-up, super-touristy Tamarindo. We spent time in Portrero and it was lovely. Hardly any people, and while there was not as much selection as far as restaurants, there was enough to make do for a week.

So, before you go, figure out exactly what it is you want to do and how you plan on getting around the country to get an idea of what things may cost.

Don’t Worry about Your Safety

Central American countries do not have the greatest reputations when it comes to safety. Before and after my trip, I had many people question me about whether it was a safe destination. Like anywhere in the world, there are great parts and not-so-great parts. There are a good number of poor people so robbery is always a possibility. Violent crime does take place there. Bad things can happen anywhere; there are no guarantees. But, in my experience, I did not feel Costa Rica was any less safe than any other place I have visited. I never felt threatened or that I was in danger. Like being a tourist anywhere, don’t make yourself an easy target by forgoing common sense.