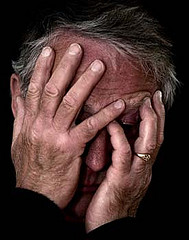 Everyone knows what menopause is, a stage in a woman’s life when she reaches her 40s or 50s and undergoes various hormonal changes which includes the end of menstrual cycles. A woman’s entire body is affected by menopause, as it can cause emotional and psychological changes in addition to physical changes as well. Researchers have uncovered evidence that men over the age of 40 can also undergo “menopause” as well, which occurs when testosterone levels begin to decrease. Just like with women, as a result of male menopause, men can experience decreased testosterone levels that can lead to fatigue, weight gain, reduced muscle tone, diminished sex drive and even erectile dysfunction (ED).

Due to the various effects of male menopause, many men will begin to experience marital problems. Lack of communication, diminished motivation to participate in the usual activities, including lovemaking, can really wreak havoc on a marriage, no matter how strong the marriage may have been previously. Communication and being in sync with one another are very important for the survival of a marriage, no matter how long a couple may have been married. If a man is feeling out of sorts, depressed, lethargic and disinterested in sex, his wife can misinterpret his behavior and begin to believe that he is having an affair, or that he is simply no longer interested in being married.

Hope for saving a marriage

Thankfully there is treatment for ED

as well as the other effects of male menopause. Medical doctors can prescribe testosterone gels, patches and similar products intended to increase testosterone levels, therefore reversing the various symptoms and reviving a man’s sex life. There can be many side-effects caused by prescription testosterone-based products, and some men opt for natural methods to treat their male menopause symptoms and ED as opposed to using these potentially harmful treatments. Fortunately there are numerous choices of all-natural herbal concoctions to boost testosterone levels, treat ED and help men to start feeling like their old selves again.

Despite the existence of male menopause, it doesn’t have to interfere with a couple’s marriage. As long as a man is able to quickly identify his symptoms and seek assistance from a physician, who can perform tests to determine if testosterone levels are lower than normal, a man has a good chance of suffering no ill effects of male menopause. However, if he fails to immediately recognize his symptoms and they are allowed to worsen, there is a good chance that the male menopause can begin to affect his marriage in a negative manner. It is important that people begin to realize how men can experience menopause like women, although it isn’t biological like it is for a woman, since not all men suffer from the ill effects of low testosterone.