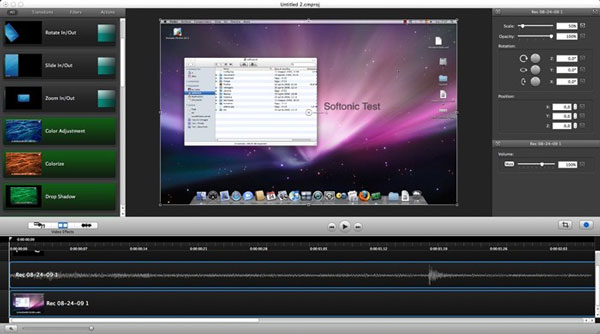 Movavi Screen Capture for Mac is a useful software for capturing screen recorded video. Many educators have used Movavi Screen Capture for Mac to create PowerPoint videos to make the topic that they want to teach easier to understand. Students can use the screen recorder to prepare presentations that their instructions ask them to do as part of their assignments. Educators can record the screen or use a webcam to record themselves as they discuss about the subject on their computers.

You can also use the screen recorder software to produce a tutorial with detailed illustrations when explaining to your audience. Research shows that people shows better response to shorter video that last for a few minutes is the best way to convey your ideas. Using a screen recorder is the best method for creating short videos.

With Movavi Screen Capture for Mac, you can choose to talk while presenting the material on the screen at the same time. Alternatively, you can plan a storyboard of the topic and add voiceover to it later. If you want to add voiceover to it later, it is recommended that you first record your own voice so that you know how long the screen recorded video should be. In this way, you will know how to combine the materials in the screen video presentation.

You can enable a microphone recording by selecting the microphone option in Movavi Screen Capture for Mac. The microphone should be set up in a distance of at least 30 cm from your face. If the microphone is set up too far away, your voice will sound quiet. On the other hand, if the microphone is placed too cloud, there will be some audible clipping effects. Nevertheless, you can edit your video later by increasing or lowering the voiceover. You can use a pair of headphones to monitor the quality of the voiceover recording.

It is recommended that you record in full screen mode even though Movavi Screen Capture for Mac gives you the ability to record partial screen. After the video is recorded, you can use the crop function to focus on certain parts of the video clips that you want the audience to see. Choosing to record in full screen mode also prevent your audience from seeing other open applications in the background. You will be able to crop, and zoom around the video elements with Movavi Screen Capture for Mac.

The mouse highlighter and custom mouse clicks tool allow you to highlight the important things that you want to show your audience in the video. These effects can help you to keep the audience more focused on what you are explaining. Movavi Screen Capture for Mac offers a variety of presets for you to export your video including 720p and 1080p. Videos saved in 720p output format will be smaller in size and the quality is also sufficient. You can choose 1080p output format if you want your audience to see the minute details in the video. Get more details at http://www.movavi.com/Mac-video-recorder/