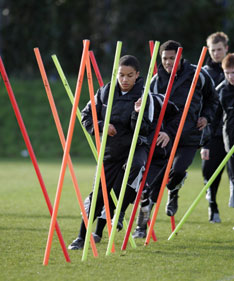 A lot of amateur football clubs will be making their final preparations for the new season, playing pre-season friendlies against clubs of their own standard and often higher in an attempt to gain some much needed match fitness and to work on new formations and tactics to help them to have a successful season.

The pre-season training sessions aren’t always fun for some people, especially at grass roots level where they might not have run since the last time they took off their boots at the end of the season. To make it fun, you want to be able to incorporate new training sessions and equipment to the sessions so that they want to come to training and put the work in. By searching online you can find some top quality football goals, (try http://www.thesoccerstore.co.uk/football-goals for examples), and great training equipment that can help you to take your club to the next level in terms of performance.

Cones might not sound like the most interesting piece of equipment ever released, but they serve so many different training purposes. They can help you to mark out small pitches for three-a-side games to work on close control, while also proving a good replica for defenders for players to dribble the ball between or around.

Bibs are another useful piece of equipment to have available to you. They’re great for playing training matches, such as defence against attack or small-sided games making it easy to tell who is on which side to avoid any confusion.

Speed and agility ladders are another great investment for clubs who pay close attention to the physical performance of their players. They help you to work on quick feet and changing direction, which can only be beneficial out on the pitch.

Passing arcs are another really useful piece of kit. Anyone can play a pass that is within a few feet of the target, but passing through an arc will actually require skill and accuracy, encouraging your players to pass the ball to feet rather than risking a loose pass that could be intercepted and may lead to a goal for the opposition.

5 Reasons Why Magic: The Gathering Is Still Thriving
Cycling And The Olympic Effect
To Top