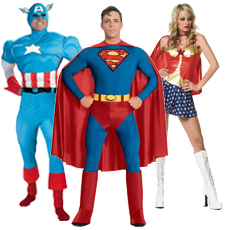 The Marvel character Hit-Girl, which appeared in her own comic book, has been in several ‘Kick-Ass’ movies. Played by Chloe Moretz, this character is popular with teenagers and adults alike. A fancy dress costume retailer might have a Hit-Girl costume in many different designs. In fact, a mother and daughter could attend the same party as each other dressed as Hit-Girl – they can even go trick or treating as her.

Another Marvel character, Spiderman was created by Stan Lee. Having appeared in several live action movies and television shows, a Spiderman costume is popular with people of all ages. Not only could a red Spiderman costume be purchased but also a pink costume which is perfect for young girls who want to be like Peter Parker.

Although a big screen adaptation of the DC Comics character Wonder Woman hasn’t materialised yet, a TV show starring this superhero was broadcast in the 1970’s. After watching an episode, a girl will probably want to dress as Wonder Woman.

Wolverine has appeared in cartoon shows and also several films, including the X-Men franchise. In the movies, Wolverine is played by Hugh Jackman and this actor is popular with both men and women. A Wolverine costume which Hugh Jackman wears or the yellow suit that is donned in Marvel Comics can be worn. When choosing the latter, be sure to purchase an entire Wolverine costume so that no other accessories have to be bought.

Superman’s cousin, Supergirl is also from Krypton. Having appeared in Action Comics, Supergirl starred in her own movie in 1984. If a couple want to choose a similar costume as each other, they could both be Superman and Supergirl. A Supergirl costume is also available for young children. If a young brother and sister have been invited to the same party, they can be these superheroes where they will look very cute.

A Marvel character which has also starred in several films, Iron Man’s suit is popular not just with adults but young children. Although a metal suit cannot be worn, a plastic or a cloth suit can be purchased instead from a fancy dress retailer.

There have been many movie adaptations of the DC Comics character Batman. Along with the 1960’s TV series which starred Adam West and Burt Ward, Christian Bale and Michael Keaton have played Batman in various movies. A Batman costume can be contemporary whereas a completely different suit can be picked that is similar to what was worn by Adam West. Either way, when this superhero costume is chosen, it won’t be mistaken for any other character.

This post was brought to you by https://www.characterfancydress.co.uk. For more great costume ideas including Halloween Fancy dress, click here.

Are Everyday Appliances Losing their Simplistic Nature?
What to Think about Before Embracing the Full-Time RV Lifestyle
To Top